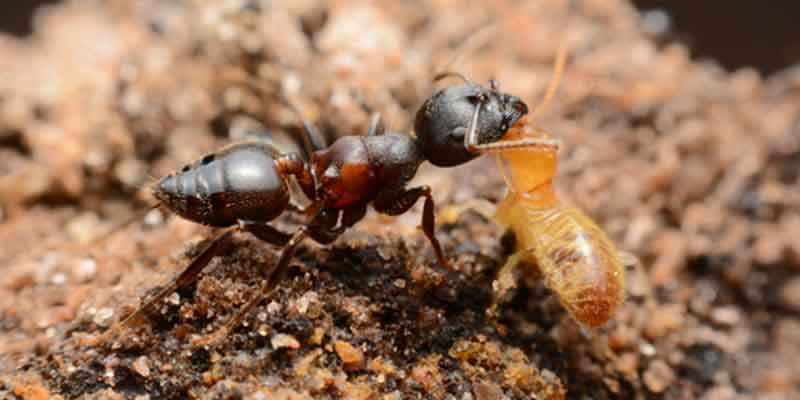 Some insects are considered social, while others are considered solitary. Ants, termites and bees are all social insects. That means that rather than scavenging by themselves, they work together to build a colony or hive.

The fancy name for this is eusociality, which is when a species maximizes their chances for survival through the division of labor and reproduction. Each individual plays a certain role as part of the colony. Eusociality is the opposite of solitary, whereby individuals fend for themselves, and parasociality, where individuals sometimes choose to work together, but each member is able to fill most roles.

The two main roles within any given colony include the “queen” (she lays the eggs) and the “workers” (they build the colony while caring for the queen and her eggs). The workers can’t reproduce but still benefit from being a member of the colony more so than they would fare on their own.

Let’s take a look at the three most common social insects.

Ants are found on every continent on the planet except for Antarctica and select remote islands. Colonies comprise the queen, male drones, and female workers. The queens lay eggs, which turn into larvae that are watched over by their “sister” workers. They then turn into pupae. The final stage is to molt into adults, which completes the metamorphosis.

Termites eat through wood. They’re not like bees, ants, or wasps in one big way: they actually belong to the cockroach family and don’t go through a complete metamorphosis. After hatching into a nymph stage, they eventually molt into an adult.

Termites are considered the first eusocial insects because they formed colonies back in the Cretaceous. The colonies comprised a fertile “king” with one or multiple queens, while the sterile males and females took up positions as workers and soldiers.

Bees have permanent wings, unlike ants and termites. Most species pollinate flowers, which in turn reward them with nectar. Bees turn that nectar into honey, which feeds the larvae until they can get to the pupal stage.

The European Honey Bee is the first domesticated bee and happens to one of the more common species.

Wasps, which belong to the same family as bees and ants, feature many eusocial species, like mud wasps.

While it’s certainly interesting to read about the social systems of ants, bees and termites, you still don’t want them living in your home. Usually, where you see one ant or bee, there are many, many more lurking back at the hive or colony. When you suspect an infestation, call PureGuard right away and we will put you in touch with our Nashville pest control technicians. To book a consultation and get free quote, call us at 615-502-2855.